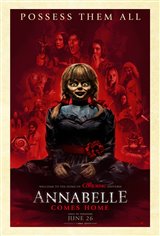 After taking charge of the demonic doll Annabelle, Ed (Patrick Wilson) and Lorraine Warren (Vera Farmiga) return home to lock her away with the rest of their cursed collection. When the couple are called away to investigate another case, they leave their daughter Judy (Mckenna Grace) in the care of a trusted babysitter (Madison Iseman).

With the parents gone the two girls invite their friend (Katie Sarife) over for some company, but her curiosity into the Warren’s reputation leads her to unintentionally set Annabelle free. Free from imprisonment, Annabelle brings with her all the evil spirits tied to the Warren’s collection for a night of terror for the three young girls with the intent of possessing them.