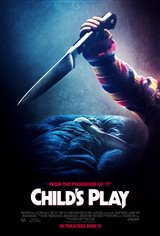 Single mom Karen Barclay (Aubrey Plaza) and her son Andy (Gabriel Bateman) move to a new city looking to make a fresh start. When Andy is given a new toy doll Buddi, who calls himself Chucky, he finds it's loaded with modern features and able to interact with most smart devices. However, this isn’t any ordinary doll, as a series of grisly murders are committed, with Andy suspecting his doll Chucky.

However, despite his efforts in making his mother and Detective Mike Norris (Brian Tyree Henry) believe him, neither takes him seriously. With Chucky’s body count ever rising Andy takes things into his own hands and assembles his new friends to take down the malicious doll.