I Heard the Bells 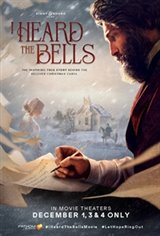 I HEARD THE BELLS tells the inspiring true story behind the beloved Christmas carol and its author, Henry Wadsworth Longfellow. Known as America's Poet, Henry leads an idyllic life - until the day his world is shattered by tragedy. With a nation divided by Civil War and his family torn apart, Henry puts down his pen, silenced by grief. But it's the sound of Christmas morning that reignites the poet's lost voice as he discovers the resounding hope of rekindled faith. Experience I HEARD THE BELLS this holiday season in this debut feature by Sight & Sound Films.