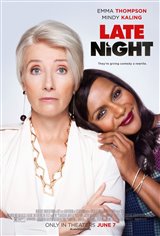 Katherine Newbury (Emma Thompson), a late-night talk show host with 28 years of experience, has won an impressive total of 43 Emmy awards. However, when it's pointed out that she has an all-male writing staff, she asks her boss to hire a female writer. He hires Molly Patel (Mindy Kaling, who also wrote the screenplay), an Indian-American with a talent for comedy, but no experience.

When the head of the network tells Katherine this season will be her last and that she'll be replaced by a stand up male comedian (Ike Barinholtz), Katherine decides she's not giving up without a fight. Molly works to give Katherine a fresh, new vibe, writing modern monologues for her that portray Katherine as more authentic and personal.