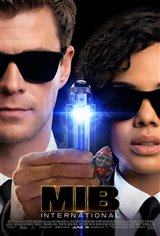 Witnessing an alien encounter as a little girl and seeing her parents neuralized by two men in black, a young woman (Tessa Thompson) spends her entire life in search of the mysterious organization they belong to until she finally finds them. Making her way into their headquarters, she encounters Agent O (Emma Thompson) and makes her case to join the Men in Black. Due to her determination, she is made a probationary agent and given the code name Agent M.

Assigned to the London branch to aid in an investigation, Agent M is partnered with the local hotshot Agent H (Chris Hemsworth). When it becomes apparent that there is a mole within the organization, it forces the two agents on the run, unsure of who they can trust. Now the two must work together to uncover the mole, tackle the new threat and save their organization.

Based on the Malibu Comic by Lowell Cunningham.