Raiders! The Story of the Greatest Fan Film Ever Made 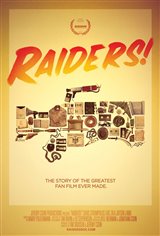 After watching Steven Spielberg's classic 1981 film Raiders of the Lost Ark, three 11-year-old boys from Mississippi decided to reproduce, shot-for-shot, the entire movie. They spent seven years on the film, titled Raiders of the Lost Ark: The Adaptation, completing every scene with the exception of the explosive airplane set piece.

More than two decades later, Chris Strompolos, who played Indiana Jones and Eric Zala, who directed and played Belloq, reunited with the cast members from their film to complete their masterpiece. Featuring interviews with John Rhys Davies, who played Sallah in the original film, director Eli Roth and more, Raiders! is the story behind the dedication these friends showed to creating the greatest fan film ever produced.