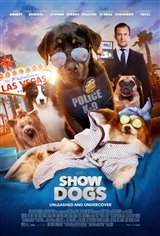 Max (voice of Ludacris), an undercover Rottweiler police dog, is working on a kidnapping case in which a baby panda was stolen. It's believed a dog show being held in Las Vegas is being used as cover for animal smuggling.