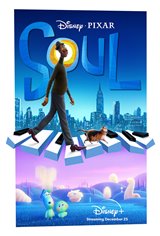 Joe Gardner (Jamie Foxx) is a middle-school band teacher living in New York City, whose lifelong dream is to be a jazz musician. However, as he's still struggling to pursue his dream, he worries it's never going to happen.

Finally, he can't believe his luck when an audition leads to a gig that very night. As he's walking home, elated by his success, he takes a misstep that sends him to a fantastical place where he's is forced to think about what it truly means to have a soul. There he meets 22 (Tina Fey), a soul who doesn’t think life on Earth is all it’s cracked up to be, no matter what Joe tells her.

However, to their surprise, they discover Joe is still alive, albeit unconscious in a hospital bed, and they rush to figure out how to get Joe's soul back to his earthly body.