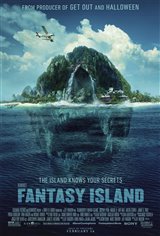 This brought back so many childhood memories. Every weekend we'd sit down and watch The Love Boat followed by Fantasy Island -- it was Must See TV. This movie made me feel like a kid again!

It was a fun watch.

Excellent start for the new franchise.

Junk. More like a one time flick movie. You watch it and forget about it. Got weird strange nothing like the TV SERIES. Like to have my money back and watch a better movie.

Believe the ones and two's-we did unfortunately watch this stinker! Loved the original show and was not expecting a carbon copy but they really missed the mark here. This could have and should have been a fantastical film. Misses big time in every category.

Could have been better, but would watch again.

Sensational entertainment with a '70's sensibility.

It started out fine and then just went into a bizarre twist. I found the movie to have gone off the deep end. Save your money or spend it on another movie.

Disappointing and plain bizarre. Found the story line that wove the stories together really contrived. Oh well. The popcorn was good.

Sooo disappointed in this movie! Definitely would not recommend it

I enjoyed the movie as it was very entertaining and well acted. I would recommend if you are looking for something with a few jump scares and an escape from the everyday. Ignore the 1-2 stars as I find this site has a lot of reviews from people who likely don't even go to the movies but have an opinion anyway.

Poor acting, when the film started it seem promising but got hokey, silly, unrealistic, just plain dumb. Don't \wast your money wait until it's on TV which won't be long.

Tolerable but not the Fantasy Island of 1978 that I remember. Casting and acting were poor and I was never taken in by the film. I think if I want a good island adventure film I might just pull out the dvd player and watch the 1964 version of Lord of The Flies. I would skip this one.

Best Blumhouse yet! Already in line for the sequel!

Not the best movie!

Better than I thought it would be...a kind of demented version of the original television show “Fantasy Island”... had some interesting twists...a decent ending and I definitely think they will follow with a sequel.

This seems to be one of the more divisive flicks in recent memory, but it's so well-made it may not matter.

If your expecting something like the TV show , you'll be disappointed . However it's not a bad flick , not great but ok. Lots of laughs and twists .

I want my money back!

the tv show was fun,, this is just mean and ugly,,

I was sooo wrong when I only gave this one star!

This will be my last review on this site. I don't know who it is, but there are a bunch of fake reviews here. They are all similar to each other and the movie is given 5 stars. This is used to boost sales. I saw this because I remember Fantasy Island as a kid, but this is nothing like it. Really, absolutely the worst film I have seen in the past few years. The fake reviews for this and the final Star Wars movie is just ridiculous. Done with this site.

It was surprisingly touching.

Not a must see but it was ok for an evening out! Bit of comedy thrown in.

Entertaining. Thriller with comedy. Not the best but not the worst either. Enjoyed it.

Not what I had expected. Found it boring, definitely a disappointment!

Loved it! Scary but funny, too.

This movie was terrible beyond belief. How anyone can give this movie any more than one star is perplexing. The worst movie I have seen in years(and I see more movies of all genres than anyone). If you see this movie coming, run away as fast as you can.

First film in the FI trilogy is alive with characters that feel solid and real.

The first "must-see" movie of 2020! Remarkable in every way imaginable and even some that are completely unimaginable!

Absolute garbage! Don't waste your time or money on it.