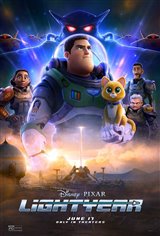 Yeah, forget it. Show your kids Looney Tunes instead so they'll grow up normal.

I did not like the first 45 minutes of this movie, but it got just a bit better later on.

Movie was more of a propaganda than anything else, sad they use a great movie to brainwash children!

Disturbing to see sexuality in a Disney movie!!! That woke crap has no place in a children’s movie. Aside from that they ruined it by not having Tim Allen back. Don’t waste your time or money on this. After the movie I went home and cancelled my Disney subscription. Disney is now banned from my home. What a monumental disappointment!

I wouldn’t bother letting my kids see this one. The “magic” of former Disney shows is sadly nowhere to be found here.

I wish Tribute would remove all of these fake, hateful “reviews” posted on here by someone who obviously hasn’t even seen the film. They certainly read like one ignorant person wrote them all simply to try and get their disgusting homophobic rhetoric read by as many people as possible. I’ve seen Lightyear and I thought it was really well done and all of the relationships in the film were handled with sensitivity and respect. They weren’t trying to push any “agenda” other than trying to teach everyone to be caring and to look for the best in everyone around you. A lesson more people should learn and take to heart. :)

Political propaganda and social messaging dominate the film. Lost are the innocent virtues of past characters and in it's place a rather bland display of social vomit. I'm guessing the positive reviews were by bots because this movie bombs on several levels.

Not the original Toy Story Magic. Politics and social messages bombarded the narrative instead of just a fun Summer romp of a film. Disney needs to get back to simply making fun family films and away from pushing social messaging toward kids. Skip this one - I'm sure we might get a good Japanese manga film this year. Light Year is not funny, just lame script writing weaved with woke themes.

not what i expected. Disney has really gone downhill

The movie definitely has elements that I, as a parent, would not want my children to see. This kind of stuff does not belong in a children's movie, period. Leaving the family-inappropriate issues aside, the animation itself was good, but even the best computer graphics can't make up for a sub-par story and poor writing. It's not even worth watching online.

My kid (9) said this was his favorite movie ever! It was funny and cute. The cat was our favorite character. He didn’t even notice the infamous kiss. Not a big deal!

I can't believe this movie is getting such a low rating. It was so thoughtful and had stuff to keep both adults and children drawn in.

nothing to do with toy story but loved it

This movie is meant for one purpose, to corrupt the mind as of the innocent children who watch it. It’s crazy how those of us who fight against things such as men with men and woman with woman, people identifying as whatever they choose, men competing in woman’s sports, and so on makes us “weirdos “ as one reviewer put it. Who is the actual weirdo here?? Time will tell. Seek help

Just a terrible movie. No kids should see this woke crap.

Disgusting Disney should be ashamed of themselves let our children be children and let them grow up and form their own opinions don't push your woke b.a on us

Very fun and enjoyable. We loved it. I can't understand the negative reviews.

Very good movie. The star ratings will be skewed due to right wing weirdos. Don’t listen to the people trying to make it political because they have nothing else in their lives.

Not a good story line. Too many twists and turns for kids to follow

Had free ticket and walked out after 30 minutes.

Worst movie. Disney is woke and failing due to crap like this

Can I rate it zero stars?? The wicked Disney destroyed the movie Lightyear. This is not a children’s movie. It’s a shame. My children will not watch it. It is sad because they like to watch Toy Story movies.

Just overall unimpressive. I don't even care about the gay scenes, it's just not what I was hoping for. The animation was really well done though.

Everything that is wrong in this country, touched by this movie in a blatant way. Would not recommend any of my friends or their kids to see . Shame on Disney

What has happened to Disney.? I guess the movie is fine for Democrats, but for the rest of u..... Why make movies only 30% of the country wants to see?

Poor story line. Sad too, so much potential. Additionally, my children and I do not need to be lectured.

Great, action-packed movie with stunning animation. To all the negative reviewers talking about this movie grooming and indoctrinating kids into an agenda (false) … you’re throwing stones in a glass church.

I took my grandsons to see this movie thinking it was safe for young kids. In the beginning they have a character who announces she is getting married to another woman. The story line continues till she dies. We shouldn't have to have this conversation with young children. Shame on Disney, they used to be safe for kids but no longer

What a waste of time……but that has become the “norm” for Disney. A lesbian scene added in for what earthly purpose?! They have doubled down on their woke agenda to groom children and have lost their moral compass as a company and family entertainment venue. We will no longer support such a perverse outfit, their products, their parks, or their movies and will look for alternatives that offer products that are in sync with family values. This was the last straw……nothing Disney allowed in our home. DISGRACEFUL!

I won't subject my kids to woke propaganda. The lesbian kissing scene was not even part of the movie originally. Only added to appease the loud woke minority. Shame on Disney. Used to be a fan growing up, canceled my + membership a while back.

Boring, clueless, hard to understand for kids, Does not makes any sense at all.

They didn't even try. Sad and pathetic. Protect your children, not worth it. They ruined a good kids character.

Pushing a wicked, sinful agenda onto kids. Nothing that has not already been foretold, but still ugly.

Going to see it again

For any traditional family with values Disney is simply done and over with ...do not push garbage down our children's throat...do you show heterosexual mommy and daddy kissing in your movies? NO! Because all Disney is doing is pushing an agenda...no more Disney for traditional families is my advice.

My daughter (9) and I loved the movie. I didn't have to explain to her why 2 women kissed because she is aware of the reality of the world. Same sex relationships are REAL. Love is love!!! Pretty sure that wasn't the point of the movie, however...