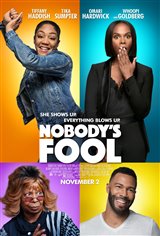 What a waste of time. Ridiculous and certainly not funny, why anyone would think Haddishs screaming thru every scene is entertainment. The acting or lack of was disappointing. Not Perry's best effort. 0/10

The movie plot was good. It just had to much cursing for me.

Terrible! poor acting, too much vugular languish, and unnecessary sex.The only redeeming actor and character was Whoopie Goldberg. Tiffany you don't have to take these kinds of roles that degrade your self and your people. Money isn't everything, you CAN do better! Tyler you have made your Money!, It time to produce some quality movies that uplift your people, you CAN do an academy award movie, you got the talent and money! DO IT!

Terrible movie. I had to walk out ; too much sex and nudity and vulgarity. Awful exposure. Disgrace to black race. This is not typical black culture and it was embarrishing. I find this a lot with Tyler Perry movies. Degrading behavior. Movie not acceptable.

very funny the actors were awesome

Terrible. Disappointed in Tyler Perry this time. Too much foul language and nudity. I will not recommend this movie. It was not funny, just crazy!

One of the worst movies I’ve ever seen. I think Tiffany Haddish is funny, but not in this movie! No one was laughing in the theatre I was in. I’ll keep an eye out for movies directed by Tyler Perry and make sure I avoid them from now on.

There was A LOT of unexpected sexual scenes; however, I laughed OUT LOUD throughout the majority of the movie!!! I don't think Tyler Perry is capable of making a bad movie. Be sure and stay for the outtakes at the end of the movie! LMAO

I will see this movie again.

Overall, I enjoyed the movie. It was good to see Omari Hardwick step outside his role on Power. He's ridiculously handsome and funny. Whoopi is Whoopi and can play my mom any time. Tika's character is like a lot of women I know...trying so hard not to explode when things really hurt them. I could relate to her. Tiffany's character what what she needed. She let it all hang out. Good job!!

It should be rated “R”. To much nudity ,sex and foul language for children to see

It was rated "R" as it should be... so the language is appropriate for the rating. It was a comedy, and I haven't seen any film that kept the audience laughing throughout the film. Blacks overpopulate America's prision....many there because of lack of money to get good legal representation, and some who should not be there in the first place ( America is still racist is it not?...just watch the news on tv). Not too unrealisist to believe someone could turn it around, establish a small business and then use his/her property to give back by hosting small weekly help groups). from a Black MSW counselor. You will not only laugh, but you will howl throughout this movie.

It was x rated. I was offended at the use of the word "Niger" over and over. I am white and would love to never hear that word again. Wondering why it is okay for a black person to throw it around so freely. Would have walked out if I had not been with two other people

Kinda funny. But if you were living in a beautiful condo with a 6 figure salary would you date a coffee barista with a prison record and a drug and alcohol addiction background. Would you host your fresh out of jail sister in this condo? If so you're playing with fire about to get burned and dragged into the criminal lifestyle. Would you spend one year chatting with the invisible man on line? After discovering her online friend was a fraud would you confront him in a trailer park? I think it was too far fetched. The baristas earring was a tip off. The blonde boss was a little too brittle. The concept is very contemporary and Whoopie did a fine job as the mother but I didnt like the barista/ad girl combo. In reality he would have ripped her off and taken off with the sister. The Ad girl should have done better, a guy with a better background.

close to being X rated.

Tiffany Haddish is hilariously funny; she keeps me laughing.