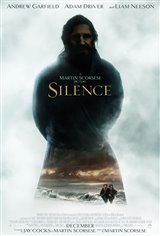 lasted 15 min. into the show and left.

To be a true Christian means you will face persecution as we do in the US , we are no longer one nation under God. God is in control, as in the movie, His ways are not our ways. More truth of persecution needs to be known.

I was all in from the opening scene at the Japan hot-spring/hell ... I'm still thinking through what happened. I never before and want to again experience that exquisite journey of suffering... nothing gratuitous in the violence and beautifully raises the dilemma of holding faith in the face of one's own and others' agony.

Incredibly slow and boring. Scorsese has created some wonderful work in the past but this caused me to walk out of the theater.

Incredibly well shot film and visually stunning. The scenes almost seem like gorgeous Italian paintings. There is no doubt in my mind that Martin Scorsese is one of the greatest artists of our time. The acting is phenomenal. This movie is Oscar worthy! Although long, it is worth it, and will leave you pondering for a long time the relationship one has with one's own faith, the fear of new faiths, and ideology vs pragmatism. A.N

Too slow. Too much voice over.

Scorsese continues to make better films than people half his age, great film. Hope this'll win him his second Oscar.

A very powerful and somber movie. Very thought provoking and shines a light about a time that I never heard of before. The studios and Scorsese were very brave to back and make this movie as its not going to be a blockbuster. It's long and dark so be prepared for it.

Acting good and cinematography great although movie is a big long and some aspects dragged out a bit.

"Silence" is an emotional movie that shows the suffering of Jesuit priests in the 17th century. We see the cruelty of Japanese people toward christianity. Father Rodrigues and Father Ferreira survived torture to give up their faith.

I printed the passes and went to the movie theatre but was unfortunately turned down as it was overbooked..would have liked to view movie but no luck!!Is it possible to get free passes to see this movie or other movie in the near future for my effort...thank you in advance for your consideration!

The film started off being interesting and I was intrigued for the first 20 minutes but as it progressed, it just felt very long winded and there was no build up at all. The ending was very anti-climatic and all I could think of "that's it?" Visually the film looked great, the scenery looked amazing and the shots were well done as expected from a Scorsese film, but the story line didn't hold up for me.

I rate the movie at 4 stars. The movie was slow at times but overall the plot moved along at a good pace. Acting was very good as the characters were believable. Enjoyable 160 minutes spent.

Very touching movie. I loves ut In the end , the japanese weren'r so bad, just protective of their culture. 4 stars

Loved this movie! The scenery and the acting were outstanding. I felt torn between sympathy and dislike for the Japanese antagonists. Great all around film.

Great picture work, good to watch. Out of the norm