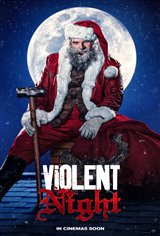 If you've been nice, you get what you want. If you've been bad, you bite it. How can you go wrong? Add in a hysterical over the top cast and script and it's an instant classic.

My brother and I really enjoyed this movie. It was no-nonsense during the fight scenes, payed homage to Home Alone, and had a bunch of hidden subtext that resulted in us cackling along in certain parts. The pacing was great, the actors all did a wonderful job, and we are going to see it again next weekend.

If you enjoyed this movie, check out Fatman with Mel Gibson. This movie had lazy writing and a poor supporting cast. It never stood a chance.

Why was this movie even made?..Worst movie I have ever seen..Didn’t go by choice..Someone else chose it..Don’t waste your money..

Who wrote the script? Bad job! The trailers were awesome, those scenes were not exactly the same in the released film. From the trailers I thought Santa might be a guy with super powers, instead his powers were intermittent that the writers only used to achieve the story line they wanted. This could have been a phenomenal film, I had great expectations but it was a train wreck combining ideas from The Hunt, Griswold Christmas Vacation, a bloody horror film, and a story line that rambled through the rabbit trails. They should hire more talented writers, make Santa a magical superhero but retain the dirty lush persona with the ancient war monger history like they had but show a storyline with out the blood and guts where Santa tricks the naughty and is kind to the nice kids. Sort of a Dead Pool kind of jokester. This could have been a fun movie but someone or several people screwed it up making it a boring FUBAR film. Best of wishes for the sequel.

Loved the humor throughout the movie! Plugging in the lights and star was awesome!

This movie was a great twist to the old fashioned Santa movies! This Santa went all in for the kids!!! Highly suggest this movie!

Liked the start, then it turned into a murder and mayhem movie, Santa did not come across as a nice guy.

This movie is not for the weak of heart. It tells two stories simultaneously. It touches so many different emotions in one movie. It is a little bloody, but that is well done too. I loved the movie, it is not your cookie-cutter Christmas movie. I especially loved Santa!

Lots of chuckles . Not for everyone, but enjoyable for those who like off beat movies . Think Bad Santa meets Die Hard and your in the ball park .

I like many below thought this movie was hilarious. I watched Stranger Things with David Harbour starring in it and love this character. In the Violent Night movie he was brilliant!! I laughed at his drunken parts and sure it was violent but hilarious at the same time! My husband & son thoroughly enjoyed it. As a matter of fact my husband was laughing quite a bit. A good movie that is definitely not for everyone. But what adult does not need a good laugh to escape this crazyness of this world nowadays??!!

I'm really surprised how much I liked this movie! And I'm not into gore or horror at all. Fortunately, it wasn't gruesome or heinous. Yes, Santa was quite violent to the Naughty-list villians, but only to save the Nice-list sweet, innocent girl and her family. Their relationship was really endearing, and Santa went into full Santa loving, giving, sacrificing mode with her after kicking an*s moments earlier. There was a very sweet message conveyed, with a tired old drunk Santa redeemed by love and innocence, recalling his true mission. And hilarious to boot!

This movie isn’t for everyone, but I really liked it. It’s pretty gory so if you don’t like stuff like that you shouldn’t watch it.

Definitely not for everyone, but I loved it!!!! If you don't mind some campy gore and a weird sense of humor go see this one!!!!

good start I liked it

This is an instant classic Christmas film for those of us who enjoy a violent good guy vs hilariously bad guy flick. Fun all the way through! Yule be laughing well after walking out of the theatre.

David Harbour and John Leguizamo's acting was good but the film itself was ok. The trailer was way better than the movie.

David was awsome as Santa and the movie was hilarious and very entertaining. The story line was somewhat weak but all in all graet performances made up for it.

Movie was ok. David Harbour is a good santa but this movie was slow throughout the whole thing. Not bad but not awesome.

I actually loved it. It was entertaining!