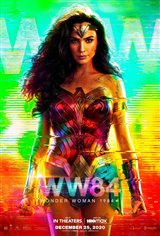 This is a steaming pile. 💩

So bad... Hera herself would be ashamed... Bad plot, bad acting, terrible plot, horrible script, atrocious plot, too much cgi... oh, did I mention the awful plot?

There is not one good thing I can say about WW. It was a waste of 2.5 hrs and I can’t waste more time on a review.

Completely horrible. Zero plot and pointless scenes. The real head scratcher is the number of people giving this anything more than a 2. I suspect that most of the support reviews are from 1 or 2 people only, just spamming this page Save your money/time!

This has to be almost as bad as birds of prey. Why do you take a great movie and then sneak in the woke people to ruin a good thing.

I had high expectations going into this movie. After all, the previous WW outings rocked, and who doesn't love the 80s? Sadly, my expectations were dashed against the rocks as wave after wave of trashy plot and dialogue made this into a snorefest. Ludicrous plot (magic stone???) and pointless missions (WW stopping mall robbers?), coupled with silly villains and lazy scriptwriting make this one to avoid. (It only got 2 stats because of the action, which itself became boring and comical as time went on).

Unbelievable that a movie this bad made it past the studio heads. All they needed was a better script... ANY script. This one is for the bin.

This movie is not meant for the masses... oh no.. The plot is so weak that only a toddler could find it interesting. Sad that millions were spent on a script that only benefited the writer. Sad, if only i could give zero stars...

We have a new classic.

this is a one star to that person or people that all they do is trash any movie that doesn't live to their standards nit picking anything dumb thing as they couldn't do better but have no clue to make a movie, I guess they wouldn't like if they went to work and if people came up to them and trash their work, they wouldn't look mirror because if they did they would see their ugly soul sinfully life, but fool them self their a good person, but how wrong they will be when they meet god in the afterlife ...but buy then wishing they change their mocking big mouth wicked life but buy then it will be too late....the sad thing about user review as it give Despicable people a place to bad mouth anything, as the saying goes what comes around goes around, u reap what u sow

Disappointing. Dull... predictable... you would have trouble describing the plot to a friend a week later, because there really wasn't any. Not a good movie by any means, regardless of the rave reviews by the fanatics as their opinions are just that nothing more nothing less.

good movie beside all the negative opinions that people give it, no prefect by any means but not a terrible movie regardless what is say as their opinions are just that nothing more nothing less

beside it flaws, it still a enjoyable movie ,would have been better if those flaws weren't there

Oscar favorite... seriously? What color are the skies in YOUR universe? Like virtually all DC movies, it was horribly bad... with the material they have in the DC universe, there's no way this movie should have been this bad... I guess the director and script writer have a special talent for ruining things... 0/5

This was heavily promoted as an Oscar favourite, but was completely shut out in the major categories. What happened? I think the Academy is biased toward female-lead comic-book movies -- it's the only explanation possible.

Meh... no other words describe it. Sorra boring but occasional action parts. See once and forget about it.

Just dull... slow... even the action is boring.

One would think that with a superhero movie franchise, a top star, and a public appetite for action movies, that nobody could screw up a Wonder Woman movie, right? Think again. The 'plot' in this movie reads like a comic... unfortunately, and Archie comic. Wonder Woman is stopping thieves at a mall and sleeping with a man that she thinks is like her long lost bf... and the villian character is the worst career choice that Pedro Pascal ever made... even the special effects are cartoony and dull. Gave it +1 star, because negative stars are not an option, unfortunately.

Wonder Woman she is for sure! Liked the villian better before she was a cheetah. Movie is very good as for good vs. evil and of course Good always outways the bad. Love this film made for all to see and learn about how powerful is the truth. Gal Gadot is sensational in this role.

Lame, really. Way too political. The villain was so obvious, so tiresome. Cheetah is the secondary villain and she's super-dynamic but this gives her hardly any screentime. And there are some real eye-rollers here that sink it further. A real waste.

I didn't like it, but I wouldn't call those who disagree with me evil, nor would I ever misuse punctuation marks to an abusive extent. Or would I?????? Gal Gadot is still good. This needed more action.

Okay....but it would've been better if the lady villain had more screentime.

I could watch this movie - ALL - NIGHT- LONG.

Great movie, good family film with imagination, can't wait to see the third Wonder Woman. Excellent acting and full of surprises. Loved the story about truth and what really matters.

Empowering? Embarrassing! Message to humanity? What, bring your bf back with a wish, into the body of another man, sleep with him, and patrol the malls. Message is: AVOID this movie!

EMPOWERING AND ENTERTAINING. LOVED IT.

Thoroughly enjoyed this film a strong message to humanity. Don't miss it.

The writers, producer and director need to find a new line of work.??????? and people are saying this was a good movie..?!? Give your heads a shake ?????? dont waste your money ????? for the person or people that keep on trashing stop your foolish, nobody cares what u have to say , trying convince people other wise while trashing writers, producer ,director and the people that like the movie ,insults show your wicked evil heart so sad of the secular world, u reap what u sow as it will be the end of a not happy ending for you

have fun watching it besides the things that would bug lots of people, how they bought Steve Trevor, how they didn't develop the cheetah the right way as i would brought wonder women villain in the 3 movie as the full cheetah and the flying like super man, besides those things still like the movie

Gal Gadot did a great performance especially with the emotional parting of her friend. Kristen Wiig was fantastic playing so many different roles as Barbara. So very entertaining and funny. You gotta love this movie, the world needs to pay attention to the message of Love not destruction. For all ages. Don't miss it.

Wonder WHAT...? This movie made Wonder Woman, a superhero that can trade headbutts with Superman, into a scantily clad mall cop... and people are saying this was a good movie..?!? Give your heads a shake! Parading her around in her sexy outfit in the 80's is NOT promoting female empowerment, btw. Plot was terrible, action contrived, and too many cheesy effects. Not even worth watching on Netflix, would give it negative stars, were that possible.

The acting was bad, the story line was even worse. I do not know what happened between the first movie and this one. Clearly they did not know what they where doing. The only reason I did not walk out half way through the movie is the money I spent and I was hoping surely it would get better and it didn’t. The writers, producer and director need to find a new line of work.

Great acting and story, filming was super, movie was a fun ride and very good message to the world. I like the first one more, but this was so good too, had to see it five times already. Clean family movie for all to see.

Terribly made movie! The taming of Wonder Woman ruined this movie. No where near the excitement, suspense and fight scenes of the first Wonder Woman. No need in making number 3 if this is what is in store for that movie.

A MUST SEE FILM. VERY E4NTERTAINING AND MAGICAL FILMING.

Loved the whole movie and was excited to see Linda Carter make an appearence!!!