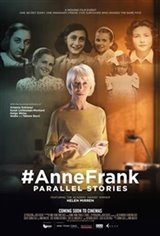 Anne Frank was born in Frankfurt on 12th June 1929 and this year she would have been 90 years old. The documentary film tells the story of her life through the pages of her diary: an extraordinary text that has made the tragedy of Nazism known to millions of readers all over the world, and revealed the brilliant, enlightening intelligence of a young girl who wanted to become a writer.

Helen Mirren will introduce audiences to Anne's story through the words in her diary. The set will be her room in the secret refuge in Amsterdam, reconstructed in every detail by set designers from the Piccolo Theatre in Milan, founded by Giorgio Strehler, and part of the Union of European Theatres. It is a remarkably faithful, authentic reconstruction of the interior that will take us right back to 1942. The room contains the objects in Anne’s life, the photographs she covered the walls of her room with, and the notebooks she wrote.