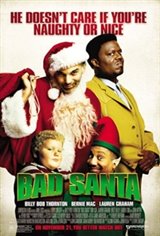 Willie T. Stokes (Billy Bob Thornton), a washed-up, wisecracking Department Store Santa who can’t help be more naughty than nice, is actually a safecracker underneath his ill-fitting red suit. Along with his ingenious Elf – Willie’s midget partner-in-crime Marcus (Tony Cox), he makes one big score every year on Christmas Eve.

As shoppers head home from the mall, they crack the store safe and make off with their own holiday stash. But then comes Phoenix.

Here Santa and his Elf find their annual heist endangered by a pesky store manager (John Ritter), a savvy mall detective (Bernie Mac), a sexy Santa fan (Lauren Graham) and an innocent but beleaguered 8-year-old misfit (Brett Kelly) who decides to believe that Willie – as intoxicated, acid-tongued and felonious as he seems to be – is the real Santa he’s been seeking.