Birth of the Dragon 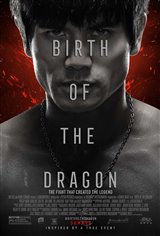 This biographical drama is set in San Francisco’s Chinatown in 1964, and chronicles Bruce Lee’s emergence as a martial arts star. It covers his legendary showdown against kung fu master Wong Jack Man, and how the fight earned Bruce the title of ‘The Dragon,’ and as the man who brought kung fu to the world.