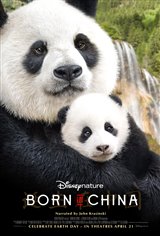 Disneynature's Born in China takes a look at three animal families — a panda bear mother and her adorable little baby, a rambunctious two-year-old golden monkey who has to learn how to be more independent when he gets a new sister, and a mother snow leopard struggling to raise her two young cubs in a harsh climate with very little food sources. We also see a herd of chiru as the females leave the males in spring in order to give birth to their young ones.

Filmed in the remote wilds of China, this film gives audiences the chance to witness some of the most intimate moments ever captured in a nature film.