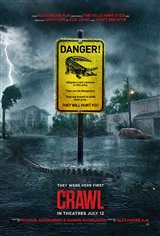 When a Category 5 hurricane hits Florida and authorities order locals to evacuate, Haley Keller (Kaya Scodelario) stays behind to search for her missing father, Dave Keller (Barry Pepper). She locates him in the crawl space under their house, but discovers he's been attacked by an alligator. While reaching for him, Haley is also attacked.

As time runs out for them to get to safety, Haley, unwilling to leave her father behind, realizes that not only are they in imminent danger from the surrounding alligators, but from the rapidly rising waters.