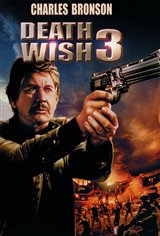 Michael Winner ups the ante once again in Death Wish 3. Any pretense of Paul Kersey (Charles Bronson) having a career in architecture is completely gone. Kersey's new career appears to be as a professional vigilante, blowing away muggers, rapists and thieves off the mean streets -- or as he terms it thinning the herd. Back in New York City, Kersey, with his usual luck, arrives just in time to find an old friend dying after a vicious beating by a multi-cultural gang of thugs. The cops arrest Kersey, but it just so happens that police chief Richard S. Shriker (Ed Lauter) is like Kersey with a badge: I'm the law, and that means I get to violate your civil rights. He makes a deal with Kersey: he can go free as long as he keeps the cops informed of his death counts. Kersey grunts in agreement and proceeds to move into a decaying tenement building in the middle of a bombed out gang war zone. The building is populated by a group of elderly tenants who are terrified by the neighborhood gang warfare. Kersey declares his own personal war on the neighborhood gang, led by a frenzied leader named Fraker (Gavan O'Herilhy), who wears a reverse Mohawk hair-style. As Kersey devises booby traps and trip-wire bombs to confound the gang, the senior citizens gleefully take pot shots at the wounded gang members from their windows.