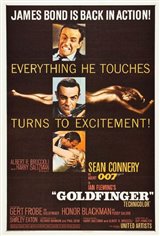 James Bond (Sean Connery)’s mission takes him to Fort Knox, where he is told that notorious villain Auric Goldfinger (Gert Frobe) is planning to rob the place. The only way Bond can stop Goldfinger is to get close to him. Soon after befriending the villain, Bond discovers he is trying to pull off “the crime of the century” by crashing the world’s economy.

With the help of his sophisticated Aston Martin, Bond must stop the evildoer and save the world all while avoiding several distractions by Goldfinger’s henchmen. There’s OddJob (Harold Sakata), the servant who kills with his steel-rimmed bowler hats, Jill Masterson (Shirley Eaton), the beautiful “golden girl,” and Pussy Galore (Honor Blackman), the sexy pilot who develops feelings for Bond.