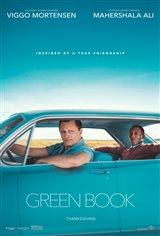 Tony Lip (Viggo Mortensen), an uneducated Italian-American bouncer who's known for using his fists to get his way, is hired to drive world-class, celebrated pianist Don Shirley (Mahershala Ali) on a concert tour from Manhattan to the Deep South. They must rely on the “Negro Motorist Green Book” to guide them to the few establishments that were then safe for blacks.