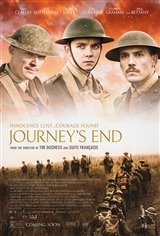 Second Lieutenant Raleigh (Asa Butterfield) has just arrived at the front in 1918 during the Great War. Enthusiastic and naive, he asks to join C company in the trenches in North France, because Captain Stanhope (Sam Claflin), who was just a few years ahead of him at school, is the commanding officer.

Raleigh's uncle, who is a senior officer, tries to dissuade his nephew, by informing him that Company C has had a bad time of it and is in for even more difficult times, but the teen is not easily put off. When Raleigh meets up with Stanhope, he's surprised to find the young man isn't the way he remembered him. Stanhope wears the battle scars of one who has spent years at war -- he's not only belligerent and short-tempered, but has become a self-loathing alcoholic.