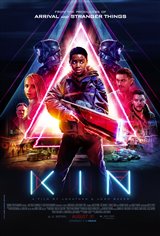 Eli (Myles Truitt) is the adopted teenage son of Hal (Dennis Quaid) and brother of Jimmy (Jack Reynor), an ex-con whose recent stint in prison left him $60,000 in debt to Taylor Balik (James Franco), a local criminal.

Suspended from school for fighting, Eli scavenges for scrap metal in old buildings. One day, he discovers a ray gun alongside the bodies of two aliens. He brings the gun home and discovers that only he is able to operate the weapon.

In order to get the violent Taylor off his back, Jimmy tries to pull off a robbery, but when it doesn't go as planned, Jimmy goes on the run with Eli. They're closely tracked by an angry Taylor, who is ready to kill them both if he doesn't get his money.