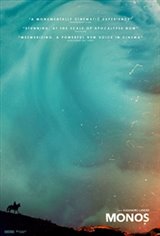 A group of teenage guerilla bandits -- bearing noms de guerre such as Rambo, Smurf, Bigfoot, Wolf, Lady and Boom-Boom -- keep watch over an American hostage (Julianne Nicholson), known only as Doctora, on a remote mountain in Latin America. They don't know why she's been kidnapped, but their squadron, named "Monos," is part of a shadowy force know only as The Organization, and they blindly take orders.

The teenage commandos perform daily military training exercises under the watch of their superior, who shows up randomly to give them orders, make sure they do their drills, and to harangue them. At night, the kids indulge in youthful hedonism. After an ambush drives the squadron into the jungle, both the mission and the intricate bonds between the group begin to disintegrate as order descends into chaos.