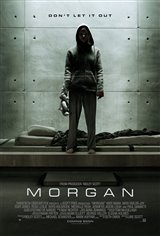 Morgan (Anya Taylor-Joy) is a very special girl who's an artificial being. Despite growing to the size of an adult within six months of being created, she still has the mind of a child, complete with temper tantrums. Kept in a remote, top-secret location where she's cared for and monitored by a select staff of scientists who don't agree on whether Morgan is a "she" with feelings and rights or an "it," Morgan becomes an uncontrollable and unpredictable force, putting them all in danger.