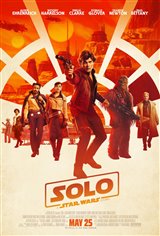 Young Han Solo (Alden Ehrenreich) and his girlfriend, Qi’ra (Emilia Clarke), go on the run in order to escape their lives as slaves. Just as they're about to make it, Qi'ra is caught, while Han goes free. Unable to return for her without being killed, Han vows to find her as soon as he's able. He joins the Imperial Army as a pilot, but they soon demote him to foot soldier when he proves unable to obey commands. He meets a criminal named Tobias Beckett (Woody Harrelson) and asks to join his gang, but Beckett doesn't want him. He points Han out to the authorities, who throw him in a pit with a "beast" for disobeying orders.

As it turns out, the "beast" is Chewbacca. The two escape and find Beckett. Beckett relents and takes the two of them on. It turns out that Beckett has an assignment to steal valuable goods for crime boss and notorious gangster, Dryden Vos (Paul Bettany).

In need of a ship, Solo and Beckett seek out Captain Lando Calrissian (Donald Glover), who owns the Millennium Falcon. Calrissian, along with his droid companion and co-pilot, L3-37 (Phoebe Waller-Bridge), accompany Solo and his crew on their daring escapades deep within the dangerous criminal underworld.