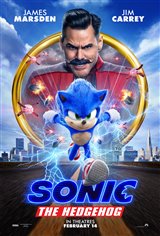 Finding himself on the run from those after his power, Sonic the Hedgehog (voice of Ben Schwartz) flees his world to hide out on Earth. After inadvertently drawing the attention of Dr. Robotnik (Jim Carrey), Sonic hides out in the garage of policeman Tom Wachowski (James Marsden).

When Dr. Robotnik tracks Sonic down to Tom's house, the two find themselves on the run from the villainous doctor. Now they must look for a way to prevent the villain from capturing Sonic and using his immense powers for world domination.

Based on the global blockbuster video game franchise.