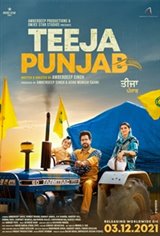 The story revolves around Bhagat's struggle to get his land back from the Sarpanch of the village, who wrongfully acquired it. Bhagat is an alcoholic, votes only for money, and fights with his wife. Mohini, his wife, is fed up with his antics and leaves him.

Meanwhile, Bhagat strikes a deal with the Sarpanch which leads him to join the ongoing farmers' protest. He meets his wife there and decides to win her trust back. During the protest, there's a positive change in him, following which Mohini decides to come back. Together, they succeed in getting back their land.