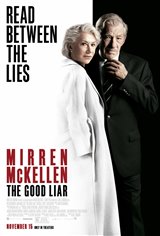 Now in his eighties, career con artist Roy Courtnay (Ian McKellen) wants to pull off one more con, with a windfall comfortable enough to retire on. He can hardly believe his luck when he meets wealthy widow Betty McLeish (Helen Mirren) on an internet dating site.

When he hurts his leg and can't get up the stairs to his apartment, Betty readily opens her home and life to him, even though her grandson feels that Betty is moving too quickly and being too trusting. However, Betty is a strong-minded woman and goes ahead with the relationship, which becomes more complicated than Roy could have ever anticipated.

Based on author Nicholas Searle's debut novel of the same name.