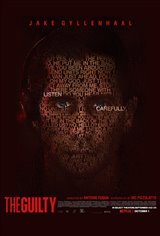 Police officer Joe Bayler (Jake Gyllenhaal) has been demoted to answering 911 emergency calls, but finds the tedious task draining. He goes through the typical ups and downs of the job, from responding to emergencies like armed robberies and calls for the fire department to more mundane and time-wasting requests that wear his patience thin. However, when he receives a cryptic call from a woman (Riley Keough) who seems to be trying to call her child, but is in fact discreetly reporting her own abduction, he puts all his experience to the task.

Working with the meagre clues she's able to provide, Joe throws his skill and intuition towards ensuring her safety, but as the severity of the crime comes to light, Joe's own psychological state begins to fray and he is forced to reconcile with demons of his own.