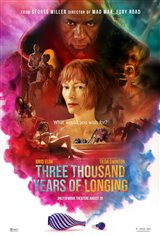 During a trip to Istanbul, Alithea (Tilda Swinton), a brilliant but lonely scholar, discovers Djinn (Idris Elba), a magical being trapped in a small memento. Djinn offers to grant Alithea three wishes in exchange for his freedom.

Introduced to a new world filled with extravagant costumes and mythologic beings, Alithea's fate rests entirely in her own hands. The only question left — will she know what to do with it?