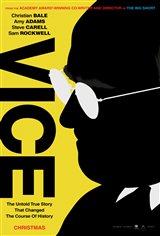 While serving as the CEO of a multinational corporation, former Secretary of Defense Dick Cheney (Christian Bale) is approached by presidential candidate George W. Bush (Sam Rockwell) and is asked to head the search committee to appoint his Vice President. Shortly thereafter, Cheney is offered the candidacy himself and agrees, but only if his duties can be expanded to include what he assures Bush are “mundane jobs,” like overseeing the military and foreign policy.

After Bush is elected President of the United States, Cheney becomes Vice President and quickly begins pulling all the right strings to become the most powerful VP in American history.