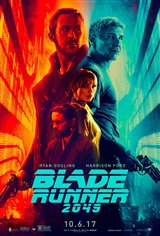 more than what I expected. either you are going to love this movie or hate it.

As others have said, if you found this movie boring, slow or without a plot, you're definitely a simpleton that needs to stick with Michael Bay explosions. This film was FANTASTIC, and i havent even seen the original, although i read up on it a little bit for a head start on this sequel. We started this movie later in the evening and it is longer at 3 hours and lets say drawn out, but not "slow" in terms of the storyline... This film was very intriguing and i know it will be even better the second time around.

not bad not great, too long and too much talk

all those who have given 5 stars for this movie were either paid well for it or just like a lame excuse of a movie an story line just to see some tits a couple times...was gonna turn movie off till harrison ford come on the scene ,and because im a ford fan still watched 20 more minutes of movie before turning it off an throwing it in the trash...i dont want it in my video library...guess its possible those 5 star reveiws were based on visual effects alone but not on story line or acting ...i give it a half star if i could visual effects ye id give it a 4

Good movie, faithful tribute to the first movie but not as good as the original. As others have pointed, the ones giving the low rating probably didn't understand what was going on so it's understandable. I wouldn't try to show this to my 80 year old dad because I know he wouldn't get it but his opinion wouldn't diminish the quality of this film.

Whew, tough crowd. I wish I could give these one-star reviews one star. This film was magnificent. I was absolutely floored. I'm going to watch it in the cinema tomorrow.

When will Harrison Ford stop and save us ALL from his eternal Crap Acting !

Absolute shit. Nothing else to say.

If you rate this below 3 stars you're missing something, or missed the 1st film, anything else is your opinion, critic it if you want all movies have flaws but it's truthful to the original philosophy, set design, and cinematography, while being its own stand alone gem. Every aspect was built thoughtfully upon the original but not copied and everyone involved performed well. The original is thought to be one of the best films of all time (subjective yet also objective). Screw all y'alls one star BS, go make something with one iota of this things beauty and I'll listen to your mouth breezing. Peace.

and like a previous poster said, why were there bee hives in Vegas? Also, what was the point of having K's car shot down near the orphanage? It didn't add anything except the Peugeot plug.

a brilliant sequel, so well done.

As a 13 year old who had his eyes opened/ life changed by the original, I must say this ticket so many boxes of a great sequal. In addition to continuing an already beautifully complex story regarding love, what it means to be or not to be human this continues to question our future as a species. The effects are top notch! I agree with review from 12-19 that this is not for simpleton. It is complex & definitely needed in a movie these days.

In addition to the previous post I could only understand about 50% of the dialogue, the other 50% being mumbled and incomprehensible.

The visual effects were great, the acting was mostly good. But the audio sounds were terrible; and the plot was confusing, had holes, and I couldn't figure what went on till I got home and read the summary.

Every second of this movie is magnificent.

All the people slamming this movie must have zero attention span and know nothing about the original. This movie is a cinematic triumph and arguably the best sequel ever made. Ridiculous special effects paired with a poingant and relevant who dunnit detective story laced with allegories about the world we live in and the direction humanity may be going. This is one of the best movies I have seen in a decade and Gosling nails this character with his reserved but pensive and quietly anguished performance. If you think this movie is too long or too boring maybe you should just keep watching Fast and Furious clones and Bruckheimer movies. Enjoy the pointless storylines and over the top explosions and let the adults appreciate real film. 5/5 I can't wait to buy this on Blu Ray.

This movie would have been amazing if it was five minutes long, unfortunately it was almost 3 hours so it sucked. The music is so bad.

It was just a bad movie. Would love to give it a great review as I love the cast in it but it was garbage. Have to agree with most of the reviews, it was the worst movie I have seen in around thirty years.

I watched this movie and thinking why am I giving this three hours of my life. I should have left after about 10 minutes.

A slow boring plot the led nowhere. I have never been this bored watching a movie ever in my life.

Wait to watch it on cable at home. That way you can turn it off after twenty minutes and go to bed.

This is my top ten worst films I have ever seen. Three B's. Bored Beyond Belief.

It was just boring. I honestly would not watch it again if some paid me $10. Dark, loud and boring. You need a phd to work out the plot.

you need to have seen the first Blade Runner , if you did, then this sequel is magic, if you did not , you may well be confused. I saw and liked the first version

The reviews I am seeing here are pretty much a good reflection of what I feel about this movie. Unfortunately I have not looked here for reviews and I searched Rotten Tomatoes and IMDb. Big mistake