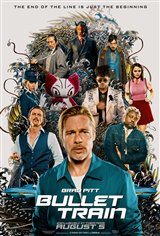 The Movie was comical the whole way through and entertaining, there were plenty of twists and turns that left you going what in the world. A blockbuster that didn't take itself to seriously and easy to enjoy.

Don't even bother to wait for the video.

This movie shouldn't even be out there for our young people to see. One of the most gruesome, bloody, no plot, F-bomb in every uttered sentence. Sickening. This movie was made for idiots. We left.

This movie was not good, the five minutes started off good , but otherwise it was bad. Brad Pitt is a relly good actor but this was not good.

This movie was really weird and goofy, the beginning started off good but then got really goofy later on. Brad Pitt is a great actor, but this definitely was not that great of a movie.

I loved the actors but then again I know them. good on the surprise aspect and the dark comedy:) Reminds me of keanu but fun...The end was pretty hilarious so for those who leave early ... try being multifaceted.

Expensive piece of junk. Too zany for me. I was glad when it ended.

Too much violence, poor plot, poor acting. Much of the movie doesn't make sense.

This movie was bad...I thought the Hateful Eight was a bad movie, but this trainwreck tops the cake.

We enjoyed this movie it was funny

I rarely leave a movie, but after countless barbaric murders and countless, purposeless f-bombs, we just needed to go. Ran for the exit after 15 minutes of torment. I am not that sensitive, but this kind of mindless profanity betrays a screenwriter with no actual vocabulary, and I could not contribute to whatever moron wrote this garbage! GRU 2 was much better!

Great actors with a terrible story line that made no sense!

The “F” word was continually used with no sense! It was violent and bloody with so many murders you lose count! Save your money!!!

Found it boring and the plot all over the place. If Brad Pitt hadn't been in it there would no reason to stay for the whole movie.

If you like dark comedy, this movie is for you. Excellent acting all around, led by Brad Pitt. Very entertaining. Never a dull moment. Excellent characterization. Loved the character Lemon. Can’t believe it got only 3 stars overall. Must see movie!

This movie has no story. It was a movie with some people fighting on the train. Brad Pitt character in the movie was the only thing that was good.

I recommend it. a bit of japanese culture, black comedy, somewhat suspenseful, sibling rivalry, ending was trite, loyalty and emotion among the cleaners as they were brothers. what agent wears a shirt unbuttoned to her naval wearing no bra. I bet every man would want to work for that agency. to crush the car, bad ending, that would never happen in a james bond movie.

This movie was bad from beginning to end. Can't imagine that Brad Pitt and Sandra Bullock would even want to be a part of this movie. Waste of money and time going and sitting through it.

I liked it, Funny!

Part of this movie were funny because of Brad and the guest actors. Not a good movie, but enjoyable as far as the fun twists. Don't waste your money and wait for it to hit streaming.

so happy only paid $3.00 last night for this movie. Love the VIP experience but no story crap walked out

It’s a well written film with great performances and a few surprise cameos. It’s very bloody however, so it might not be for everyone. I loved though I think it could have turned down the violence and F bombs a bit without losing anything to the plot.

It's a fun, silly movie, the time flew by. The comedy and jokes aren't constantly trying to make you bust your gut and the choreography supports it. Superb execution of Chekhov's gun throughout. None of the screentime is wasted or pointless, it all adds to the story or comedy in some form.

dumb. cheap movie made on a train.

Poor Brad..tried to re do his year 2000 gem Snatch..save your mony and put towards Snatch DVD

I liked the way this movie kept tying up loose ends...it answered all of the questions that you had while watching. There were times when you didn't understand something and think "ok, i'll just have to believe it, it's a movie...", but then, at some point, they give you a reason for it being so. You don't have to suspend belief (disbelief?), you get a credible explanation...right up to the very end! Wow. Will see this movie again.

wow omg blood and the f word, thats so bad that cant possibly be a good movie it isn't inline with my values :(((

Don’t waste your time or your money on this uninteresting story with gratuitous violence. A complete waste of time. 20 minutes I will never get back. Luckily we did get a refund.

Stupid waste of time. Whoever wrote the script had limited vocabulary. F word throughout. I am shocked that Sandra Bullock would want her name associated with the film.

Loved it! Funny, thrilling, great cinematography and soundtrack. A thoroughly enjoyable ride from beginning to end!

Too much f word. The stupidest money I've seen. Waste of money. Should have walked out!