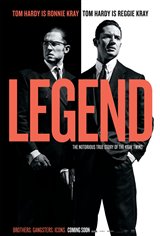 I loved this movie. I was prepared to not like it because of the violence stated in one review. It was refreshing not to have all the special effects but just good, funny acting. Yes funny. Tom Hardy did a good job acting in both parts. At the end I wondered which brother was the crazier.

Why would anyone go to see a film about 2 criminals (one of them insane) & be surprised about the violence & foul language??? Tom Hardy was excellent as the twins. Could not understand what they were saying? Go to the East End of London - that is how they talk!

I thought Tom Hardy did a very good job with the parts of twins but often the dialogue difficult to understand. Extreme violence.

Loved it. Acting was fantastic, and storyline good! A slow burner and perhaps a little longer than it needed to be, but a great depiction of this story.

Tom Hardy is one of the most unlikable actors working today.

Tom Hardy's acting was astonishing in both parts!!! Other than that the movie was disgusting, loaded with extreme violence and fowl language. Most of the dialogue was not clear enough to be understandable. I suppose it should have had sub-titles!!