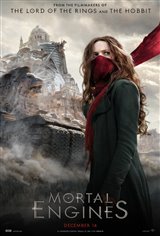 This was an excellent movie. I didn't know much about it before going in other than cities fighting which sounds super cool. But the story of multiple cities and multiple characters enthralled me and I really really enjoyed this movie! Watch it, you won't be disappointed!

Great movie, better then star wars, no reason for it to have done poorly in the theaters.

Great Steampunk-themed movie. Enjoyed the story and the cinematography. Many complain about drawn out CGI scenes in other films but it really worked in this movie. Hoping for a second movie since there are four books.

Not bad but not great. I didn’t know what to expect but I would say if didn’t quite deliver what I wanted and the ending was a bit dragged out. Could have been a bit shorter

An entertaining movie. No, it is not going to win any Oscars, but then again neither did Star Wars. My 11 and 112 year old children thoroughly enjoyed the movie as well. For those concerned about the portrayed violence mentioned in other reviews, it is comparable to any PG-13 Marvel movie.

This movie was really good!

This is a very fun science fiction movie! The acting is good, as well as the plot! I would recommend seeing it!

Not behavior nor future I want for todays generation! Shame, for giving them such violent n depressing examples of human behavior!

Saw this at 1:30 Christmas eve I was the only 1 in the theater - they ran the movie just for me felt guilty well watching it! - This was a futuristic & unusual story that could of seem stupid without the amazing special effects that made it seem quite possible & believable! - I felt the acting - over all story-line & 3D special effects kept you on your toes so you could not take your sees off the screen & rooting for the good guys to overcome their demise that was about to happen! - worth seeing this in 3D!

Dragged on and on, Star studded Cast but conveyed no feeling, no comic relief, found it difficult to develop sympathy/empathy for the characters...Unique background setting and somewhat interesting story line which Peter Jackson should have been able to shape/deliver into something memorable. Wanted to walk out but my son was so bored he feel fast asleep-and I didn't want to wake him. We are huge Peter Jackson fans otherwise...

This movie was amazing it kept me on the edge of my seat the whole time loved it .

Great Sci-Fi/Steam Punk, non-stop action movie. Much better than i’d expected. The opening sequence set the tone and pace for everything that came after. Violent but not in a violence for the sake of violence kind of way, as many of today’s movies unfortunately seem to be. 5 Stars. RAN

Loved this great adventure story ...Interesting characters , visually intense ....two hours of enjoyment ....anyone that said it was boring must have had their eyes closed .... 8>)

Visually stunning. Fun to watch and will see it again.

This movie was boring.

Great movie despite the media's "bomb" opinion. Lot's of action, great story. You can tell this is a Peter Jackson movie. Highly recommended.