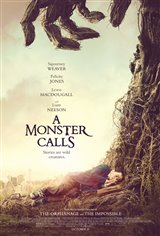 Due to his mother's (Felicity Jones) worsening illness, and constant bullying by classmates, 12-year-old Conor (Lewis MacDougall) is plagued by nightmares. One night, a voice calls to him and Conor discovers an unlikely ally in a tree-shaped monster (voiced by Liam Neeson) that appears at his bedroom window.

The monster tells Conor three stories that draw him into a fantastical world and takes him on a journey of courage, truth, and faith.

Based on the 2011 award-winning children's fantasy novel of the same name by Patrick Ness, which was honored with the Carnegie Medal and the Kate Greenaway Medal in 2012.