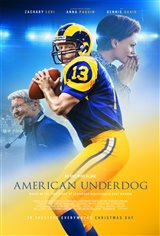 Kurt Warner (Zachary Levi) has always dreamed of being a professional quarterback for the NFL, and he gets the chance when he's picked up by the Green Bay Packers. However, one small mistake and Kurt finds himself quickly let go. In order to support himself, his girlfriend Brenda (Anna Paquin) and her two young children, Kurt finds a job stocking shelves in a grocery store. When he's approached by Jim Foster, who wants him to come play arena football, Kurt is at first reluctant. It's a far step down from the NFL, and he still has hopes of getting on another NFL team.

However, after he marries Brenda and money becomes an issue, Kurt takes Foster up on his offer, and becomes a favorite with the fans. When the season concludes, he's asked by the St. Louis Rams, who've taken note of his success in the lesser league, to try out for their team. With one of the coaches saying he's now too old, Kurt has to beat the odds and show he's ready for the big leagues.