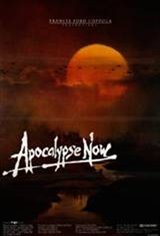 During the Vietnam War, the young American Captain Willard is given the assignment to hunt down and kill one of his own: Colonel Kurtz, who has apparently gone insane, murdered hundreds of innocent people and constructed a strange kingdom for himself deep in the jungle.

Willard and his crew embark on a surreal river journey to find Kurtz, meeting along the way a Lieutenant-Colonel who surfs during live combat, Playboy bunnies dropped in by helicopter to entertain rowdy troops, and the inhabitants of a French plantation trapped in colonial times.