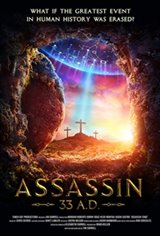 When a group of the world's brightest young scientists is assembled to work on a secret new project, it's no surprise that groundbreaking discoveries are made. Funded by billionaire Ahmed Amir and led by world-renowned genius Ram Goldstein, the small group has unlimited resources at their disposal to study the science of matter transfer.

Ram and his team push themselves and their equipment beyond the realms of scientific knowledge and are stunned to discover they have unlocked the secrets of time travel.Delighted with this turn of events, Amir pushes the team to be the first to send humans back and forth through time.

This is an exciting prospect until Ram discovers that the project is actually being backed by a militant extremist group in the Middle East. It started out as a way to quickly move weapons and supplies undetected, but with the new time travel aspect, it takes a far more sinister turn. Amir is determined to destroy Christianity before it begins.

Believing that the resurrection was a conspiracy based on rumor and gossip, Amir thinks that if he can go back in time, he can prove that Jesus never rose from the dead.