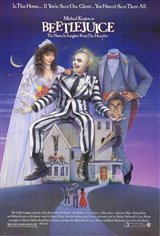 Adam and Barbara Maitland (Alec Baldwin, Geena Davis) are planning to redecorate their country home in Connecticut, when their car goes off the road and into a river. They soon discover they're dead, according to the Handbook for the Recently Deceased.

Their home is purchased by the Deetz family: Charles Deetz (Jeffrey Jones), his wife Delia (Catherine O'Hara) and Charles' daughter Lydia (Winona Ryder) from his first marriage. Delia, a sculptor, begins transforming the house into a modern art piece. The Maitlands are still in their home and don't want to share it, so they travel to a netherworld where they're assigned a caseworker, Juno. She tells them if they don't want to share with the Deetzes, they'll have to scare them away.

However, only Lydia, who befriends them, can see the Maitlands, so the Deetzes aren't aware of their attempts to be frightening. That is, until the Maitlands contact Juno's former assistant, "bio-exorcist" ghost Betelgeuse (Michael Keaton), who has a number of tricks up his sleeve.