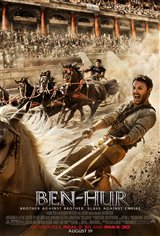 Judah Ben-Hur (Jack Huston) has endured five years as a slave before being in a shipwreck and washing up on shore. Having grown up as a member of one of the most respected families in Jerusalem, he's finally able to return.

He seeks justice for the wrongs done to himself and his family by his childhood friend, a Roman named Messala (Toby Kebbell), who had Judah's mother and sister imprisoned. Upon his return, Judah learns that they contracted leprosy in prison and decides to get vengeance by competing against Messala in a chariot race.

Based on the 1880 novel Ben-Hur: A Tale of the Christ by Lew Wallace.