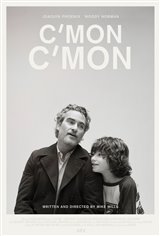 Radio journalist Johnny (Joaquin Phoenix) is traveling around the country to interview children about their thoughts and feelings about growing up in America. When he calls his sister Viv, she asks him if he can watch her nine-year-old son Jesse (Woody Norman) in Los Angeles while she goes to Oakland to be with her husband Paul, who's suffering from a mental illness.

Johnny reluctantly agrees, and when Viv is unable to get back when she promised, she agrees to let Johnny take Jesse on the road with him to do more interviews with children. Along the way, he's surprised to find himself getting closer to his nephew and becoming a father figure to him.