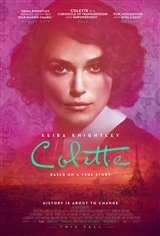 Country girl Gabrielle (Keira Knightley) marries an author, known simply as "Willy" (Dominic West). Willy is famous for his writing, but as Gabrielle soon learns, he puts his name on other people's work. When he asks Gabrielle to write novels to be published under his name, she dutifully writes a book called Claudine a l'ecole, based her school days. It becomes an instant success, flying off the shelves like no other book attributed to her husband. The novel is so popular that it spawns a number of products.

However, as her husband gets all the glory, Gabrielle, who has changed her name to Colette, slowly comes to the realization that this doesn't sit well with her. Willy demands that she write more Claudine novels, and she does, to please him and more importantly, to make money to pay for Willy's lavish lifestyle, which includes constant gambling and whoring. Finally tired of Willy's demands and philandering, Colette discovers she is attracted to women and has affairs of her own.
Director:
Wash Westmoreland
Studio:
Elevation Pictures
Producer(s):
Christine Vachon, Elizabeth Karlsen, Gary Michael Walters, Michel Litvak, Pamela Koffler , Stephen Woolley
Cast:
Keira Knightley, Dominic West, Denise Gough, Fiona Shaw, Robert Pugh, Eleanor Tomlinson
Writer(s):
Wash Westmoreland