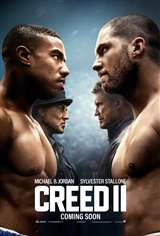 Adonis Creed (Michael B. Jordan) is up against the challenge of his life. In 1985, he lost his father, Apollo Creed, who was killed by Russian boxer Ivan Drago during a boxing match that ended tragically. Against the wishes of his trainer Rocky Balboa (Sylvester Stallone), Adonis accepts a challenge from Drago's son Viktor (Florian Munteanu), who's also a boxer.