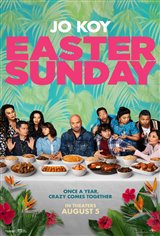 Actor Joe Valencia (Jo Koy) gets a call from his mother, inviting him home for Easter Sunday. At first, Joe is hesitant; he's been busy with auditions. But he decides to take a road trip with his son, Junior (Brandon Wardell), and visit his family.

He comes home to find his mother feuding with his Tita Theresa, his cousin Eugene owing a group of men money, and a cop, who happens to be his ex (Tiffany Haddish), pulling his car over. Jo only has one day to squash drama, repair relationships, and bring his family together.

This feel-good comedy is based on Jo Koy's stand-up comedy routines and real life experiences.