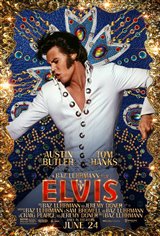 The story delves into the complex dynamic between Elvis and Parker spanning over 20 years, from the time Parker spots Elvis at a concert, just after the young man releases a single on a small record label. Realizing Elvis could be his ticket to the success he's always craved, Parker convinces the Presley family to allow him to manage Elvis. As Elvis rises to fame, he gains notoriety for his stage movements, which leads the Colonel to have Elvis enter the army, where he meets one of the most significant and influential people in his life, Priscilla Presley (Olivia DeJonge).