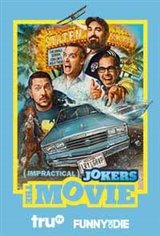 When four teenagers (Brian Quinn, James Murray, Sal Vulcano, and Joe Gatto) try to sneak into a Paula Abdul concert in 1992 in Staten Island, posing as security guards, wreak havoc, Paula vows to get her revenge.

Twenty-five years later, the group is now famous and has their own hit comedy show, Impractical Jokers. Having forgotten that they once trashed her concert, Paula Abdul is now a huge fan. She bumps into them at a restaurant and gives them three VIP passes for her show in Miami. The four guys compete in hidden camera challenges to decide who will go and who will be left out.

Based on the truTV television series Impractical Jokers.