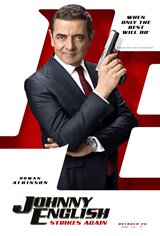 Retired spy Johnny English (Rowan Atkinson) is teaching young children at a school when he's summoned by MI7. They need him back in action because the country is in chaos after the identities of British undercover agents are leaked. The British Prime Minister (Emma Thompson) is less than thrilled by this turn of events, but she doesn't have a choice.